Cantenac Brown 2006 and its crazy price

- October 30, 2007
Talking about interesting wine prices (see my previous post about Larcis Ducasse)... when Château Cantenac Brown 2006 was released on the 4th of June, everyone was in shock. The big question for 2006 was: how much will the price drop. Cantenac Brown decided to turn things around: instead of lowering the price, they doubled(!) the price. Result: the all-inclusive consumer price ended up being around 60 euros (nice graph: 2004 was 20 euros and 2005 30 euros). 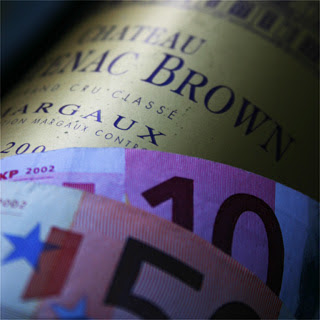 What was happening here? Well, there is a new owner: the ambitious Syrian-born English billionaire Simon Halabi, who earlier also bought the Mentmore Towers in the UK. Anyone who knows Château Cantenac Brown will see the stylistic resemblance between these two impressive structures. After the improvements by previous owner AXA Millésimes (conducted by the Lynch Bages dream team of Jean-Michel Cazes, Daniel Llose and Christian Seely), Halabi sees an even bigger future ahead for this Margaux Cru Classé. Most interesting here is the letter that Halabi wrote to the Bordeaux wine trade (the négociants); the original in French is printed below. 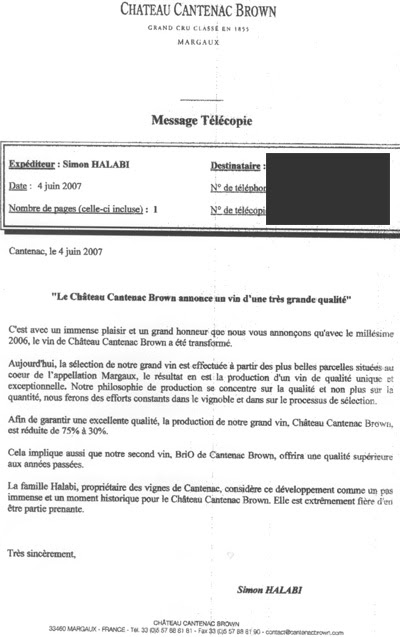 Under the heading "Château Cantenac Brown announces a wine of great quality" Halabi's words can be summarized as follows:

- hereby we announce that with the vintage 2006 the wine has been transformed
- the selection for the Grand Vin is restricted now to the best plots only, with the effect that instead of 75% just 30% of the produce is used for the first wine (i.e. Cantenac Brown)
- the Halabi family considers this development as a milestone, and a historic moment for the château

Right after the release many négociants decided to boycott the wine for its surprising price policy. Investments are made everywhere in this prosperous region, and a château can not expect that these are paid back within one single vintage. But there was some demand however, and some traders just acquired the amount of bottles that were ordered. I guess no trader has decided to build up stocks of this wine.

Most buyers seemed to be new customers, not aware of the old price of the wine - the loyal customers that followed this wine over the years have largely pulled out. Which I think should be of concern to the château. I expected most new customers to be Asian or so, but it seems that the wine is also sold in Europe (Germany, Denmark, Spain, even some in France, but I'm sure nothing in Holland). Nevertheless, Halabi has not altered his price since, and unless the smaller production, the château must have enormous stocks. I'm very much looking forward to the Foire-Aux-Vins of 2008 and 2009, and see what will happen to the price...

Last April I tasted the wine myself. It's a modern wine, quite oaky, and a bit extracted. Not the typical refinement of a Margaux (my rating: 7/10, see Bordoverview, also for all other ratings). But this is an early judgement for a very young wine, and I'm looking forward to retaste the wine after it has grown up. If I can afford it.
2006 Cantenac Brown Margaux Simon Halabi tasting notes

Anonymous said…
It will be interesting to see how things develop in view of the recent developments in the UK. Who knows- maybe the property will be back on the market again?
September 11, 2009 at 3:10 PM