En primeur the Château Larcis Ducasse 2004 was 'just' 25 euro, I bought the wine two years later in a French hypermarket for only € 26,50 (i.e. before the start of the Foire-Aux-Vins). The 2005 belongs to a totally different league: this vintage showed the freaky price jump of 75 euros to € 100,- per bottle. An unprecedented leap, and the result of a perfectly marketed super-vintage, combined with the exceptional ratings for this Larcis Ducasse 2005. Most well-known tasters were enthusiastic, and the Americans were most passionate about this Grand Cru Classé de Saint-Emilion from the hands of the talented Stéphane Derenoncourt. It was Robert Parker who had already picked out the Larcis Ducasse 2004 as a very successful wine, and a year later the 2005 was given the top rating of 95-98, which he later even revised into 96-100. James Suckling (from Wine Spectator) had directly honoured the 2005 with the ultimate score: 95-100 points. Well, the effect of these scores were clear: the 2005 vintage got more or less out of reach for most of us. 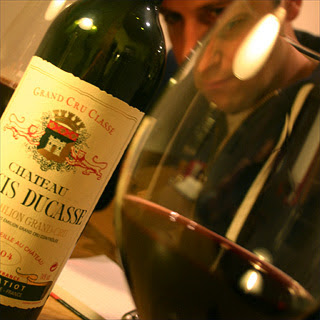 But luckily, the Larcis Ducasse 2004 is not the latest affordable vintage: with the 2006 the owners showed that they can also bring down the price: the 2006 en primeur is priced an acceptable € 38,-. Although my estimate is that lots of 2006 prices will in future Foire-Aux Vins have come down (more about that subject later), I think the Larcis Ducasse 2006 will maintain its price. Personally I found this wine one of the recommendations within the large 2006 fleet.

Back to the 2004, I tasted it yesterday. Impression I. Dark wine with a dark-fat nose, clearly quite some concentration. The just opened bottle exhibits firmness, a wine with a bite, with tough acids. And yet the texture of the Larcis Ducasse is - already - fairly soft.

Impression II. Wine has breathed and warmed up a bit (it came straight from the cellar). Nose is showing seductive, vital red fruit - depth with some nice cassis-alike sweetness. Intense. On the palate the wine has gotten more and more unctuous, but with good grip. It is rich, 'well-filled' and quite powerful, without being harsh. The acids nicely kick in as the finish commences. I would not call this wine elegant, or utterly refined (at least not in this stage). This is what I would define as very attractive youthful strength. Absolutely delicious.

I fully agree with your notes on the 2004 Larcis-Ducasse. I really loved it, with all its primary fat, rich concentration and huge presence. I tasted it with another David, who was not so 'moved' by it, because it is not 'Bordeaux as we know it'. He underlined the capacity of the wine, but it is clearly a wine loved by people who embrace the newer style of wine making on the right bank. Still Bordeaux, but with a signature of 'the new world' as well.