- November 10, 2007
Talking to several Dutch wine merchants reveals what was already apparent: the Bordeaux 2006 primeurs campaign has been a failure. Reason number one is that the prices were too high for this 'average' year. The sales volume has sometimes plummeted to only a fraction of what was sold the previous year. Reason two: people have already emptied there wallets for the 2005 primeurs, everyone wanted to get hold of at least some wines of this declared super-vintage. And a year following a great year is naturally overshadowed by its predecessor - this has happened for example to the good 1983 vintage and more recently to 2001 and 2004, both interesting classic vintages. Fact is that most buyers are reluctant to empty their wallet for a second time. 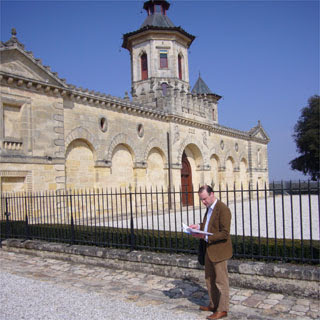 If we look at the price development of a more or less comparable vintage like 2004 we see that the majority of the wines can later, at the French Foire-Aux-Vins, be acquired for a better price. Not all wines are available at this bi-annual wine market, but many can be found. Compared to 2006 the 2004 primeur prices at the time were modest. With the large remaining 2006 stocks it is thus quite likely that in 2008 and 2009 Bordeaux 2006 will be offered at interesting prices.

And there is a more striking indication: at the last Foire-Aux-Vins (September 2007) even the prices for a majority of 2005s had come down! Of course there was room for the prices to move downwards, for the primeur prices had never been that high. But we're talking about the extremely sought-after 2005 vintage, and I must say I had not foreseen this. Clearly this makes the expectations for 2006, to go down in price, even stronger. One remark: most top 2005 Bordeaux wines (the First and some Second Growths) were not available anymore. Betrand Le Guern - once again - presents us the underlying data for this story. To see all price comparisons check out his excellent website.

One reason for the château owners to raise their release prices is the widespread speculation with Bordeaux wines. Château owners see their older wines (5 - 10 years) being sold for higher, and sometimes much higher prices. And what they are trying - understandably - to keep some of that 'bonus' for themselves. By holding their own wines in stock, and asking higher prices. In doing so the châteaux themselves have entered the realm of speculation: they invest in their own wines.

Good reasons altogether not to buy too many Bordeaux wines en primeur (except for the really rare ones). Also, speculation might in the future not be as profitable any more as it used to be. With the new level of release prices, few room is left for significant price raises, at least within the first years after release (as Le Guern shows us). For 2006 the difficulties are now even hitting the (near) top level of the market: other than before, selling the so-called Super Seconds appeared to be not so easy, and difficulties were even reported (see most recent Decanter) bringing Cheval Blanc to the market. A sign, because usually all First Growths are being sold like hot cakes.

ON BORDOVERVIEW.COM YOU FIND THE ORIGINAL RELEASE PRICES FOR THE MOST IMPORTANT BORDEAUX PRIMEURS FOR THE VINTAGES 2004, 2005 AND 2006. YOU CAN USE THESE OVERVIEWS TO SEE FOR YOURSELF HOW MUCH A PRICE OF A WINE YOU ENCOUNTER HAS GONE UP, OR DOWN.
2004 2005 2006 Bertrand Le Guern Cheval Blanc Foire-Aux-Vins primeurs