- November 06, 2007
After just having tasted some acceptable 1996s - Pibran (7+/10), Labégorce-Zédé (7+/10) and Lilian Ladouys (7,5/10) - I came across two splendid 1999's: Château Arnauld (8+/10) and Château Carteau Côtes Daugay (8,5/10). Realising once again the Relativity of good years, lesser years etcetera. But also: for many 1999s I think it is now the perfect time to be opened. The mentioned 1996s aren't very accessible, they are somewhat tough, and some are even a little bit dusty. They do share a pleasant autumnal bouquet, giving - say - the romantic impression of a forest after rain. But the 1999s offer more. This posting focusses on a not so well-known wine: Château Carteau Côtes Daugay. 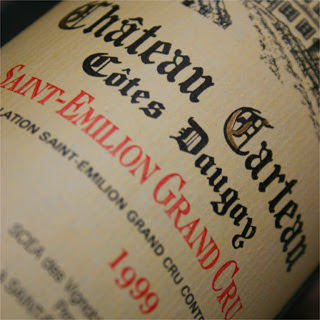 During the Primeur tastings from last April I noticed that - other than the wines from the left bank - many Saint-Emilions suffer from the same defect: they're overextracted. Unfortunately I did not taste Carteau Côtes Daugay 2006, but I truly hope that the Bertrand family did not alter the style of their wine. The 1999 is in my eyes the near perfect example of a classic Bordeaux. It's a delicious drinking wine, lean and supple; while nothing lacks... it's all there: the nose is tempting and at the same time modest... a fine balance which gives the wine a beautiful tension: slenderness with an almost erotic touch. The texture again shows this great precision and harmony: the wine is supple yet with marvellous depth (cassis, cedar, coffee). Before I realised the bottle was empty.

Château Carteau Côtes Daugay is situated just alongside the D670, the main road leading from Libourne to Saint-Emilion. From this road a hill gently rises. This hill (tertre is an old French word for hill) bears the name "Daugay". More well-known is Château Tertre Daugay, situated near the top of this hill. Carteau is located on the south-west slopes (côtes) of the Daugay hill. The slopes mainly consist of limestone: a thin top layer of loose debris on a subsoil of solid rock. The limestone debris is mixed with clay, and in the lower parts we find more sand. The land is planted with merlot (75%), cabernet franc (20%) and cabernet sauvignon (5%).

Château Carteau Côtes Daugay does not belong to some large corporation, but is still family owned: several generations of the Bertrand family have been in charge, and today the wine is made by Jacques Bertrand and his three children Anne-Marie, Bruno and Catherine. Information about the wine is quite scarce on the internet, and just a few professionals taste (and rate) the Carteau en primeur: for 2006 only Jacques Dupont and Stephen Tanzer did. But on the internet I found a page titled "French Wines You May Not Have Heard of but Should Try" on which the wine was rightly mentioned. And particularly noteworthy: Jean-Luc Thunevin mentions Carteau Côtes Daugay on his blog as a wine that should possibly be promoted to the category of the Grand Cru Classés. Definitely a clear statement from this successful winemaker. Anyway, a wine à suivre!
1996 1999 Carteau Côtes Daugay Jacques Bertrand Jean-Luc Thunevin Saint-Emilion tasting notes