- January 21, 2008
On the 11th of January Château Lafite Rothschild released its 2005. That is, the bottles were presented to the world. Quite remarkable are the scales that are drawn onto the bottle of this exceptional Bordeaux vintage. Scales weighing sun and rain. "As a reminder of what nature generously gave us." Scales that will still be looked at by our wine-loving children and grandchildren when they inspect the great cellars of the future...

Shown below is Lafite's official announcement of the 'birth' of their 2005. Note the interesting phrase "For those who will have the pleasure of drinking this wine (...)". Probably not very many people will have this pleasure: Lafite Rothschild 2005 was initially released en primeur on 21 June 2006 at about € 500,- consumer price, and in the meanwhile the wine has about doubled in price. Precisely that is the other reason for Lafite Rothschild to put an illustration on their bottle: it will help them preventing counterfeit. 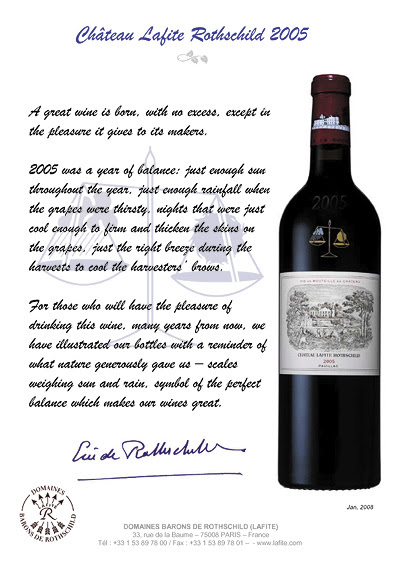