- January 28, 2008
Recently I learnt about an Indian IT millionaire who co-owns a vineyard in his home country. He had been buying grands crus from Bordeaux, started to love them, decided he wanted to create similar wines in India and planted Cabernet and Merlot. I do not know the precise characteristics of the area, but I would be surprised if these grape varieties would be ideal for that Southern region. And there it is: the concept of terroir – in future postings I will further explore this complex but key concept.

In any case, (micro) climate is an important aspect of terroir, and the climate in India is obviously not similar to that of Bordeaux. I would suggest this wealthy man to import cuttings of more heat resistant varieties like Mourvèdre, Grenache, Tempranillo and Primitivo. Then – provided that he also takes the soil into account – he maybe could obtain wines not only of good quality, but also of great character and originality. And that brings me to white Bordeaux.

Whereas the terroir of this beloved region is ideal for making (dry) white wines, the reputation of these wines is highly insufficient. On this blog after 25 postings not even one word is granted to them! Yes, the sweet version, Sauternes, is getting some attention and esteem. Dry white Bordeaux – no matter if it comes from the most simple appellations Bordeaux (blanc) and Entre-Deux-Mers, or from the Graves and its top district Pessac-Léognan – is made from mainly Sauvignon and in a lesser degree Sémillon (in Sauternes the proportions are the opposite). The latter gives the wines body and rich aromas of apricot, almond and light spices (try a dry 100% Sémillon from Australia!), the Sauvignon provides acidity, freshness, citrus and exotic fruit aromas (Sancerre, Pouilly-Fumé). The range of quality and price levels is broad, varying from a simple but delicious Bordeaux tout court Château Roquefort, of which the 2006 is currently available at around € 8,- at Bordoverview, to the magic Pessac-Léognan Château Haut-Brion with a 2006 at over € 400,-. 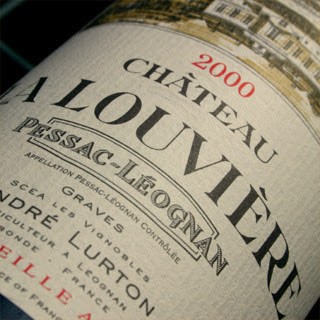 More reasonably priced in Pessac-Léognan is the wine of Château La Louvière, conceived by the collaboration of owner André Lurton, a real white Bordeaux advocate, and the brilliant Denis Dubourdieu, professor at Bordeaux University and the worldwide white wine specialist. The 2000 shows a nice straw yellow colour with hints of green. On the nose I clearly find the influence of the new oak barrels in which the wine is partially fermented and aged: toasted bread, vanilla, mocha and smoke in addition to the more discrete citrus flavours. On the palate the wine is medium bodied and slightly creamy, has a nice balance and modest acidity. The wine would be an excellent company to oysters au gratin, grilled lobster or white fish (e.g. halibut) with a lightly curried cream sauce and baked apples (Elstar).

After having read this posting, and having tasted this wine, our Indian friend will definitely bring Sauvignon and Sémillon to his vineyards. In order to honour the concept of terroir I would personally advice him to rather look at varieties like Vermentino, Greco Bianco or Malvasia!
André Lurton Denis Dubourdieu Haut-Brion La Louvière Pessac-Léognan Roquefort Sauvignon Sémillon terroir