- February 28, 2008
One of my favourite ways to spend the evening is to open a special bottle with one or more friends. Actually the fun starts earlier, when thinking about which wine to open. Then: the pulling out of the old cork, the contemplating about one's age when the wine was mis en bouteille, the pouring out of the wine in the large Riedel glasses... then the sniffing, the tasting, the exploring... the writing, the talking...

It even gets better when the wines do stand supreme. And that is exactly what happened on the regular Thursday of 21 February 2008. Witnesses are Noraneath Phlek, a Bordeaux-lover from Paris who visited Amsterdam and was in for a drink, and Jan van Roekel, Burgundy-lover living in Amsterdam and never not in for a drink. 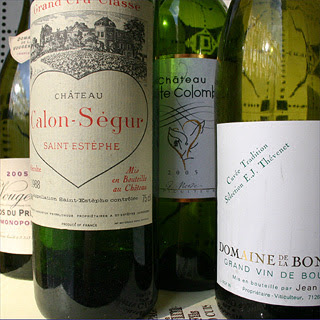 The first wine was of the type Shock and Awe. The Cuvée Tradition 1995 from Jean Thévenet’s Domaine de la Bongran (Mâconnais). This more than 12 years old white wine was of an extraordinary beauty. It was a rare experience to drink a – more or less dry – white wine that is so rich and so ripe.

Thévenet picks his grapes as late as possible when these are very ripe, if not overripe. The 'just very ripe' grapes are used for the Cuvée Tradition (the one we tasted), the overripe grapes account for the Cuvée Levroutée, and then there is the Cuvée Botrytisée, naturally from grapes that are attacked by noble rot. Naturally? Well not quite: in the Mâconnais, but also in Burgundy as a whole, it is very uncommon to make wine from botrytis-affected Chardonnay. There are some producers, for example Domaine Leflaive, who do not necessarily sort out (all) botrytised fruit, as it can add complexity to the wine. But in general it is something we see in Sauternes, not in Burgundy.

The enormous concentration in the wine is not just the result of the ripeness, but also of the low yields and of the applied vinification methods (to put it very simple: every step is taken Very Slowly). As said: with an Awesome result. The nose is very ripe and impressive. Tropical traits, but not just the cheap tropical sweetness. Very rich taste, the wine feels soft in the mouth and is not completely dry. Sweet ripe pink grapefruit, good acidity, honey, some sweetish spices. An incredible wine, and with a long finish.

My 1995 was still an AOC Mâcon-Clessé. Later the new appellation Viré-Clessé was installed, but the wines from Thévenet (one of the kings of the Mâcon) were regarded as too atypical to be labelled as Viré-Clessé, so the younger Thévenets are now sold as - just - Mâcon-Villages. If you want to read more about this joke, check out what Dr. Marty from PJ Wine wrote about this.

Clearly we were in the mood for more, but how to proceed after the Grand Bongran? What about a Château Calon-Ségur 1988? That turned out to be another good idea. The twenty year old cru classé from Saint-Estèphe appeared to be perfectly à point. A dark wine, full, sweet-ripened, fierce. Deep purple nose, hints of creamy school paint (at least the stuff they used in Holland in the 70's). Rich and very complete in the mouth. Rounded and balanced. An animal, graceful wine. A velutinous beauty.

In between we also briefly tasted the other two wines on the picture: the white(!) Vougeot 2005 "Clos du Prieuré" from Domaine de la Vougeraie (beautiful classic white Burgundy) and also Château Sainte Colombe 2005, a very pleasant Côtes de Castillon about which I will write soon.