- February 02, 2008
Recently I came across a cover of the Japanese wine magazine "Real Wine Guide". It shows one of the wines that I wrote about earlier, the Haut-Médoc Clos du Jaugueyron (see my 29/12 posting). "Real Wine Guide" doesn't sound very Japanese, but it neither does sound very English. It belongs to the same kind of Far-East sort of English as does, for example, the "China Wines Information Website". But well, I shouldn't say anything: an English-speaking reader of this blog has pointed out to me that my English is not completely without mistakes... 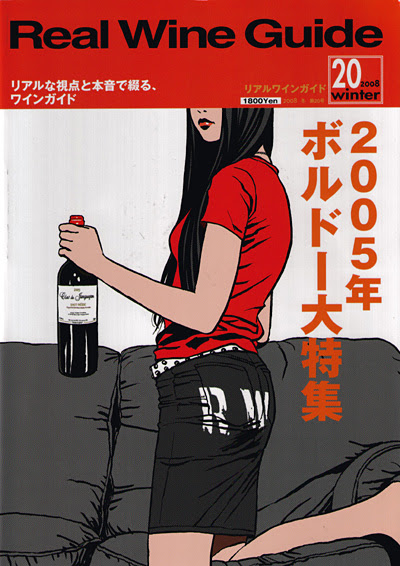 But let's look at the cover! Personally I think it is incredibly beautiful. I showed it to my artist friend Kim Holleman and see here her reaction "I totally love it (totally!)". I do not know where graphic design ends and Art commences, but to me - with my European eyes - this is Art. Just compare this to the ordinary glossy covers of Decanter or La Revue du Vin de France. Anyway, I definitely wanted to show this awesome cover on my blog.

But as interesting as the cover itself is the fact that Clos du Jaugueyron is part of it. The article inside features mainly grand crus, and just a few other wines. Clos du Jaugueyron not only made it into the article, but it gained praise, and it even ended up on the cover of the magazine as a sort of Coup de Coeur. Maybe it is a little hard to see on the copy above, so here is the detail of the cover with the wine. 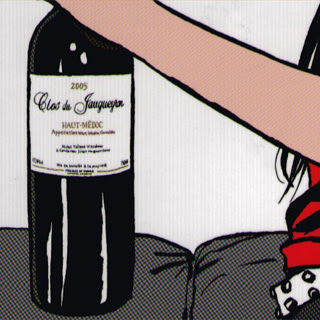 It is not the first time that this wine is picked out as something very special. As noted earlier the Clos du Jaugueyron 2004 stood an excellent chance at the Grands Vins de Bordeaux 2004 tasting of the Grand Jury Européen.

Clos du Jaugueyron is a relatively small property in Arsac, at the border of the Margaux appellation, close to Château Monbrison and Château du Tertre. The property is small, but getting bigger: in 2006 it has grown from 2,5 to 5 hectares - growth to the East, into the gravely soils of the neighbouring commune of Macau.

The Jaugueyron is definitely not a standard Bordeaux. As I described in my earlier post (about the 2003) "a little unusual, with a distinct, but attractive character". And also "Very open, pronounced. Very good." This particular character is partly the result of the diversity of grape varieties in the Clos du Jaugueyron vineyard: besides the known varieties cabernet sauvignon, merlot, cabernet franc and petit verdot you will find - on a plot planted in 1898 - some malbec, some carmenère and even some unknown grape varieties. Quite exciting.

Two other things that account for a wine with pronounced fruit and richness is that owner Michel Théron does not crush the grapes (the alcoholic fermentation is thus carried out with intact berries), and that racking is kept to a minimum (hence the wine ages on its lees, resulting a more complete wine).

Should your curiosity be whetted now, no worries, at least when you're Dutch; the wine is recently available at Bordoverview (pdf, in Dutch). Offered with pride.
Clos du Jaugueyron labels Médoc Michel Théron Real Wine Guide tasting notes