- March 11, 2008
In the new Decanter I read an interesting article wherein Guy Woodward comes back on the surprising outcome of the Saint-Emilion 2005 blind tasting as presented in the second last Decanter edition. In short: the lesser known wines outperformed the big names. In the tasting report only a few words were said about the possible reasons for this outcome. And especially with the extreme price differences, it seemed worth looking for an explanation. Hence Woodward's second article. 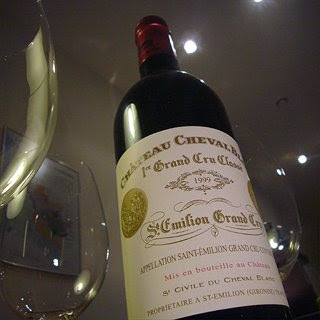 Just to start with two surprises: the label "Best Value" was awarded to Château Tertre Daugay 2005. To fresh up your memory (if necessary): this was one of the chateaux that lost its Grand Cru Classé status in 2006. Implying that their 2005 will be the last vintage that is presented as a grand cru classé (well, at least for the time being). And at this very last moment, apparently the wine is finally shining... how theatrical.

Another surprise: Château Cheval Blanc 2005 is 'just' one of the 43 "Recommended" wines. Nothing more, nothing less. How Ausone and Pavie would have performed we will never know, as these properties declined to submit samples for the tasting. Cheval Blanc took the risk, but in Woodward's reflection on the tasting one can wonder if it was wise for this Premier Grand Cru Classé to take part. And the same can be said for quite a number of other participating grand Saint-Emilions.

So why could it happen, this outcome? First, in a great year many wines are great (Jancis Robinson: "Quality is very much closer together than prices in 2005"). Second: most top wines aren't really made to instantly please and seduce in their early youth, and especially when tasting blind it is very hard if not impossible to correctly assess the quality and future quality of an infant wine. And third: the top wines were bottled the latest, so they had the least chance to become more or less stable in the bottle.

And while the experienced tasting panel realises these things, still the highest scores were granted to the fruity and more accessible wines. A very interesting sentence to quote also: "The modern-style Château Angélus was one of only two premiers grands crus classés to score four or five stars, suggesting again that while tasters may claim they are sceptical about a more modern style, their marks tell a different story."

Confusing. Difficult. And at once I felt like opening and tasting my one and only bottle of Cheval Blanc, a 1999. One of my most special bottles from the last century, maybe kept to be drunk many years later on some special occasion. But no, I was going to drink it now I decided, so I called my friend Job Verhaar and asked whether he felt like tasting the wine. And unless the fact that he'd recently had a disappointing experience with a Cheval Blanc 1947, he said he would show up. 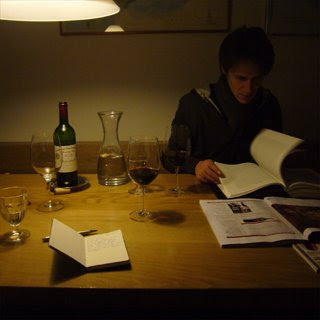 JOB VERHAAR TASTING CHATEAU CHEVAL BLANC 1999, AND READING ABOUT IT.

To start with the conclusion: I would give the wine a 9- (out of 10). The nine because the wine was great, the minus because it didn't fully live up to its high expectations, its status, its price.

Cheval Blanc 1999. This is what I regard as a very classic Bordeaux. No fat oak, no big concentration, but an original, pure and softly ripened Bordeaux. The wine is dark, with in the scent some black currants alike sweetness. Plenty of depth - if that isn't putting it too irreverently.

I'm not sure if this is what one calls the apogée of a wine, but at least it is getting close I would say. Many 1999's are great to drink these days, and so is this Cheval Blanc. The nose is very open and very convincing. In the mouth the wine is soft yet intense and powerful, with serious acids kicking in rapidly (but pleasantly) after the first oral touch.