- March 04, 2008
At the recently held Conference on Climate Change & Wine in Barcelona different and even opposing views on the subject of climate change have been expressed. One of these views is that classic regions such as Bordeaux and Burgundy will have serious problems in producing the high quality wines that they are known for. I would think nobody will miss today's habit of chaptalising when it becomes unnecessary. And don't the experts always tell us that drought is essential for the creation of truly great wine?

An opposing view comes from heavyweights Michel Rolland (wine consultant) and former owner of Cos d'Estournel Bruno Prats. They say that climate change will have a positive effect on mentioned classic regions. No more artificial tricks that will have to be carried out to get enough maturity or concentration.

Cabernet Franc, being the main ingredient for the prestigious (and expensive) Cheval Blanc, is a particular good choice I would say. It is the same variety that was selected and planted by abbot Breton from the Saint Nicolas de Bourgueil abbey in the Loire valley, where it is since also referred to as "Breton". Here, and in neighbouring appellations Bourgueil and Chinon, it comes to its best results.

At the Salon des Vins de Loire, which takes place in Angers every year in the beginning of February, David and I 'discovered' a relatively unknown producer who makes fantastic Chinons, Pierre Sourdais. His range of wines splendidly reflect the richness of terroirs in this tiny appellation. 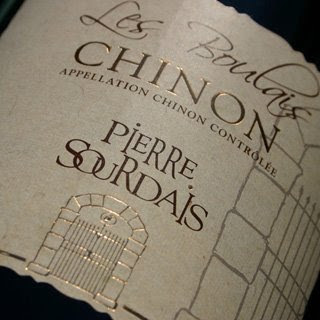 Sourdais' top cuvée, Les Boulais, comes from the plateau overseeing the river valley. The more than 50 years old vines are planted on a limestone soil covered with white pebbles, perfectly retaining the heat of the sun. To me the Boulais is an unbelievable example of what the combination of terroir and the underestimated variety of Cabernet Franc is capable of delivering.

The colour of both the 2005 and the 2006 is deep purple. On both nose and pallet this wine exhibits powerful, rich and complex flavours of plums and blackberries, lead pencil and tobacco, (white) pepper and... stones warming up after a serious rain shower.

The wine is already delicious, but very young and very powerful, and you should not hesitate to store it for at least ten years. A truly serious wine this Boulais, comparable with classed growths from Bordeaux... and that with a retail price of just € 16,50... hear, hear!
2005 2006 Bruno Prats Cabernet Franc Cheval Blanc Chinon climate change Les Boulais Michel Rolland Pierre Sourdais Salon des Vins de Loire