- April 24, 2008
Almost half a year ago I wrote that the Bordeaux 2006 prices might come down in the future (see posting from 10 November 2007). But if I take the omnipresent complaining about the 2007 vintage into account, it is very well possible that people start diverting to Bordeaux 2006, which is still widely available at primeur price level.

A somewhat comparable effect could be seen with 2005 and 2004, but for a different reason: confronted with the incredible prices of the 2005 primeurs, people went back to the - still available - 2004 primeurs. Prices for the 2004 primeurs had seemed quite normal until then, but could - in the light of the new 2005's - be redefined as low. And today people might revisit the 2006 primeurs for their relatively interesting quality. Which of course might have an effect on its future price trend. Average 2006's we will still see as bargains in the near future, I think, but the most interesting wines of that vintage have just become a little bit more interesting. Time will tell, eventually. 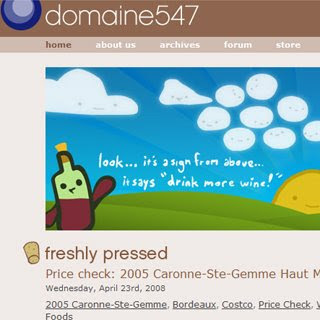 Talking about bargains: I just read a great blog posting from the Californian retailer domaine547. Apparently, Château Caronne Ste Gemme 2005 (Haut-Médoc) is being dumped at a local supermarket for only 14 dollars (EUR 8,78), while domaine547 asks the normal price of 30 dollars (EUR 18,82). To me domaine547 is clearly setting an example by writing this straightforward - and funny - story, and simply suggesting its customers to seize this "ridonkulous steal", as they call it. Honesty, transparancy, etc. will survive in the end, as can also be read in the reactions. Just for the record: in Holland this wine was offered en primeur - two years ago - for about 12 euro.

Finally, sometimes you see something that makes you think: wow, if only I had thought about this... just check out this great idea: First Blush!
2004 2005 2006 2007 Caronne Ste Gemme domaine547 First Blush prices primeurs

Anonymous said…
Wow, this was really offered for 12 euros en primeur? I had no idea...I wasn't in business when the 05s were being offered, so I am sadly at the hands of big distributors and gray market importers who are now bringing the 05s into the country. But considering the exchange rate, $30 a bottle (and backing into my wholesale cost which is obviously less than that), it doesn't seem like I got a bad deal at all. But Costco...seems like their stock must be mismarked, as $14 a bottle, even when the dollar was stronger, still would be less than the en primeur cost.
April 24, 2008 at 11:19 PM