- May 31, 2008
What is happening in Bordeaux? After the primeurs campaign finally started off seriously, and seemed to be in full swing up until about a week ago - with mostly very uninteresting prices being presented (compared to the 2006 vintage the average price drop is 3%) - the caravan came to a standstill halfway this week. Almost.

The most important release was Château l'Evangile 2007 with an average consumer price - including VAT - of € 112,- (i.e. per bottle). I wonder who would be interested in this wine. It received average ratings, it is from this average drink-soon-or-you-will-be-disappointed,-if-not-already vintage. Okay, the price is 16% lower than the 2006, and 33% lower than the 2005, but don't forget that the exceptional 2005 was 124% more expensive than the 2004! And with that the price for the 2007 is still 50% higher than for the 2004... Yet another proof of the Awful Saw-Tooth Theory (see in 4th paragraph if you're interested). I can't get used to these prices.

Probably the big-name-châteaux are making up their minds now... or give the impression they are... and more uninteresting prices will probably be presented next week. Other wines released this week were Malartic-Lagravière (-3%) and Bernard Magrez' La Tour Carnet (-4%). Click here to see all released wines.

As in the old days, perhaps Hermitage can be helpful. Often average Bordeaux wines were "Hermitagé": some powerful red Hermitage was added to give the wines more colour and structure. A practice that has since long been abandoned - except for a nostalgic experiment (since 2004) from Château Palmer: their Historical 19th Century Wine. Palmer plus 15% syrah from the northern Rhône. Interesting. 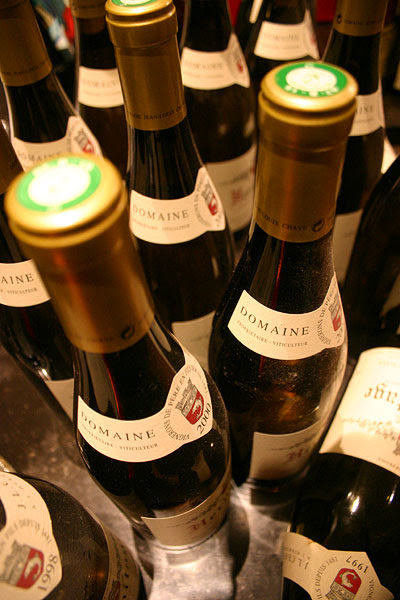 But the kind of help I mean is mental help. To forget about an overpriced Bordeaux vintage by drinking an (equally overpriced?) Hermitage. An Hermitage blanc in this case. From 1997, and from Domaine Jean-Louis Chave.

And why not enhance a great experience - and foster oblivion - by having the Hermitage saumoné? Sure. Thus I cut fat slices of Scotch "Bawykov" salmon, smoked in French oak and beech, and also in a secret mix of spices, and I put these chunks - with organic butter - on lightly toasted white bread. Dramatically delicious.

The Hermitage is beautiful! The colour deep yellow, the nose squealingly rich, and complex. Matured. Pink grapefruit, ripe apple. Hints of butter and brioche. The corpus a little lighter than expected - and lighter than de 1996 - but with a pleasant (and not quite expected) fraîcheur. Long finish, with a slight impression of tea, and a little nutty. Mmm!

So should you want to suppress your sadness about the Bordeaux 2007 campaign, just add some Hermitage to your... salmon... and you're all set. At least for this weekend.

To be continued, as always. 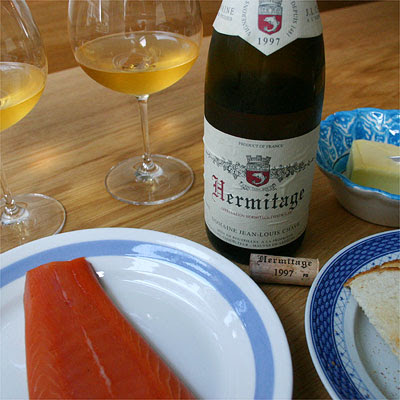