- November 30, 2008
People who follow this blog might recognize the name: David Clark. The first time that I met David was in December 2007, when Jan van Roekel and I visited him in Morey-Saint-Denis. I wrote a posting about that visit, and so did Jan (you will have to scroll down a bit to find it). 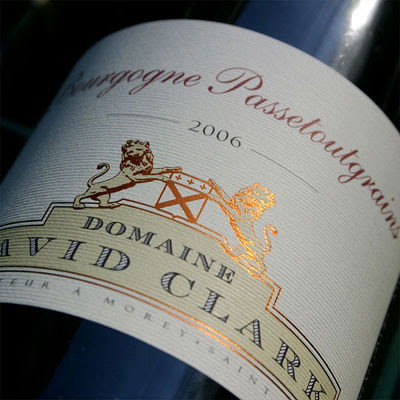 At our visit we tasted 2006 from tank, in which it was stabilizing prior to being bottled − the tank just an intermediate step between barrel and bottle. In barrel: 15 months, and then in bottle for most of the year 2008 at the domain. David insisted on waiting with the shipment, and I was only allowed to collect my share (6 cases) recently. Note that we are not dealing with some very special grand cru, but simply with a − very special − ordinary Bourgogne Rouge and Bourgogne Passetoutgrains. This is a good example of Slow Wine.

I was very curious to taste the wines again, one year later, from bottle, and it is unbelievable how these wines have grown. The Passetoutgrains has fully grown up, and is now totally irresistible. The Bourgogne Rouge is 'in development', showing very powerful and intense pinot-fruit which will probably soften in the coming years. The wine improved after being open for two days, so if you want to drink it right away, this is a wine to decant.

But at this moment it really was the Passetoutgrains that blew me away. Most striking: the super sensual nose, as from a total natural beauty; fresh manure. Very sappy, intense and lovely. Couldn't stop sniffing at this wine!

For the true Burgundy lover: I have a few bottles available (with a maximum of three bottles per wine per customer) so if you're interested, do not waver. At least that would be my modest advice. Anyway, you're lucky when you're Dutch: because this is where you find the wines.
2006 Burgundy David Clark Jan van Roekel Morey-St-Denis Passetoutgrains slow wine tasting notes