- November 24, 2008
Nothing so frivolous as a champagne tasting, this week in Bordeaux. This week it was all about CO2, with the Bordeaux Wine Board (CIVB) announcing it will reduce emissions by 15% in the next five years. And by 75% by 2050.

The most immediate CO2 culprits are glass bottles, which are to be made lighter, and road transport, which is to be reduced. How exactly all this is to be done, and enforced, is not yet clear, but another announcement is due in February next year.

Apart from that good news, foie gras and tattoos both made it to the top of the news list.

I went to Périgord to interview foie gras producers, checking if the credit crunch was rippling their way yet. It will, but not till after Christmas, they say.

The French can't imagine a Christmas or a New Year without either foie gras or oysters. I don't eat foie gras, and much prefer caviar (farmed if possible), but the foie gras story was an interesting barometer. Luckily for the ducks, the foie gras producers union has recommended that there be a 10% reduction in production numbers by 2009, so they can take a break from being stuffed. Most foie gras in the south west of France is made from ducks not geese, by the way. 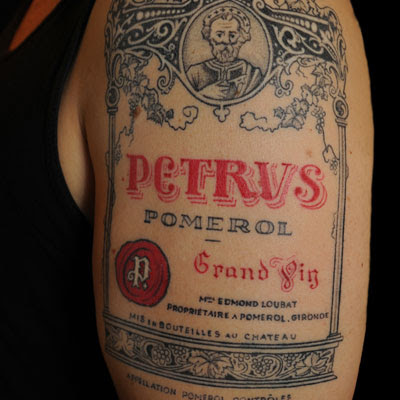 And the tattoo was the story of a New York wine lover, Daniel Sobolevskiy, who had the Pétrus label tattooed on his arm. A spokesperson for the owners, the Moueix family, welcomed the move, saying 'Bravo le tattooist'.

It is quite a complex label, and took three weeks to complete. What I hadn't realised, because I hadn't looked properly − I am not a regular Pétrus drinker, I have to confess, and not for want of liking it − is that it is St Peter on the label. Holding, the keys, not to heaven, but to the Pétrus estate.