- February 21, 2009
The sweet white wines of the Loire region belong to the greatest sweet wines on the face of earth. Actually it is not valley of the Loire hosting the vines for these wines, but the valley of the Layon, a fairly small tributary of the Loire. The wines from this area, or actually some of these wines, deserve this statement about greatness. Because for many these wines remain more or less unknown. It makes the wines affordable, great, but obscurity is simply undeserved for the beauties produced here. 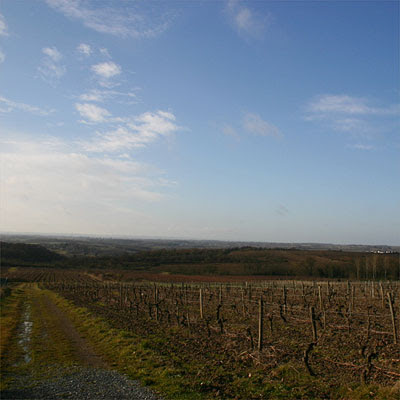 So why among the greatest? That's basically the combination of terroir (which comprises a whole range of factors...) and grape variety, chenin blanc.

To begin with the terroir. This northerly wine region produces wines with an attractive freshness, there is always good acidity countering the sweetness, it makes the wines digestible and pleasant. Then more local: the soil of the Layon valley. We visited Domaine de Juchepie in the commune of Faye, and the soil here consists of schist and heavy clay. Eddy Oosterlinck, who guided us around, advised us not to step into one his freshly ploughed vineyards, as our feet would soon grow into massive lumps of clay. In addition to this clay there is the local schist, which can be seen perfectly on the 'coteaux' of a little ditch along the road. 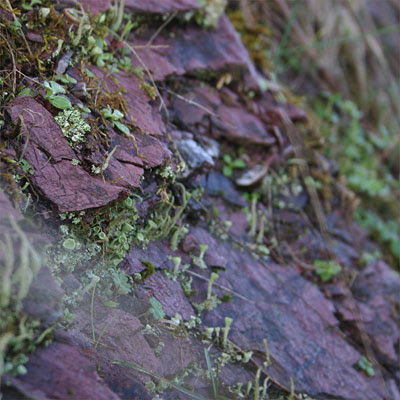 THE LOCAL SCHIST ROCK OF THE COTEAUX DU LAYON

And a third terroir-aspect: the mist that crawls up from the valley floor, up the slopes, in late summer and autumn. This helps the noble rot develop in the grapes. The pourriture noble that is so important for character of the sweet wines.

Then the grape variety. I have always found chenin blanc a fascinating variety, mainly for its ability to age. Tasting a matured chenin blanc can be an amazing experience. But Mr Oosterlinck pointed out another factor: the ability it has to express the terroir on which she (or he?) grows − the same which is said about the pinot noir. And it's true, both varieties are often at the base of very refined wines: wines that "let speak" instead of "speak". To compare: a speaking variety would be, for example, gewurztraminer or muscat (sometimes these types even scream...). 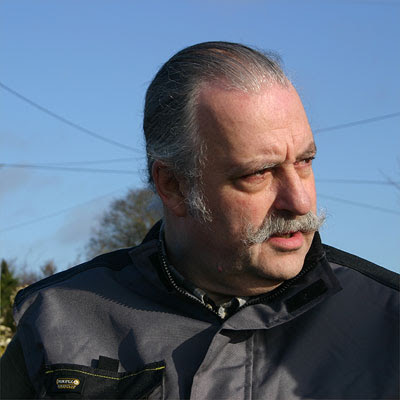 EDDY OOSTERLINCK, OWNER (WITH HIS WIFE MILEINE) AND WINEMAKER AT DOMAINE DE JUCHEPIE

Oosterlinck − from Belgium − handles his plants and soil with great care. He practices biodynamic farming. That's beyond organic farming. For example Oosterlinck makes tea from nettle, horsetail and yarrow which he sprays on his vines. Horsetail (prêle) for example protects against downy mildew, a fungal disease which is most commonly fought by spraying copper. Thanks to the horsetail this quite inevitable practice can be minimised, and in some years even be completely skipped. And this keeps the soil healthy, alive.

Also, there is no vendange vert at Domaine de Juchepie. According to Oosterlinck, with green harvest the plant puts energy in shoots and bunches that are then later removed. Oosterlinck applies strict pruning before the growing season starts (leaving 10 buds for an adult plant, and 6 for a younger plant). A somewhat more risky approach, because with vendange vert you can decide later what you want to take away, and what not. 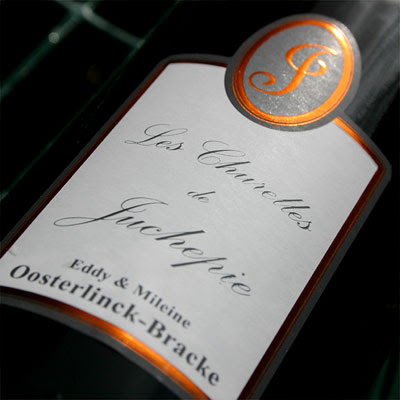 LES CHURELLES DE JUCHEPIE, A MOELLEUX THAT TASTES ALMOST LIKE A LIQUORUEX, BUT IS LIGHTER AND HAS MORE PRONOUNCED ACIDITY, AND FRESHNESS

Well, we finally arrive at the winemaking, but this posting is getting to lengthy, so let I summarize that this is Slow and Non-Interventionist winemaking − e.g. no battonage and no soutirage. The wine always matures on oak barrels, this accounts for an open (and natural) character of the wines. Do not think you will taste oak, these super-intense sweets simply eat, devour, the oak, as Oosterlinck puts it − the oak has no chance...