- March 30, 2009
Yesterday we visited ProWein in Düsseldorf. Up front I had made the wise decision to only explore the wines of Bordeaux. With that the whole thing was at least 'surveyable'. ProWein is drearily huge. Hall after hall stretches out, country after country, with countless sorts of wines. And everyone is trying to get attention. Anyway, ProWein is one big busy wine frenzy. But enough about that, let's focus on something good: the wines from Bordeaux that I encountered. 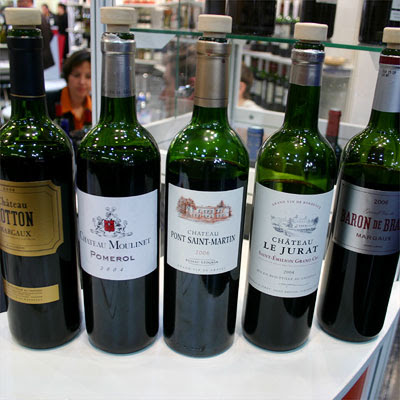 I tasted a large number of wines, and in this posting I shed light on a few, the 15 that I liked the most. The descriptions are brief, as I didn't have the time to make extensive notes.

4. Château Arnauton 2005, Fronsac. Dark and intense. I particularly remember its force from the last time I tasted it, but now it comes across quite pleasant. Is it loosing its hard edges? Will soon retaste this wine.

6. Château Fonroque 2006, Grand Cru Classé de Saint-Emilion. Yes! One of the best this day, this organic Saint-Emilion. Refined-seductive. Tender base. Not heavy. Good acidity. Refined is the word that keeps coming back.

10. Baron de Brane 2006, Margaux. This is the 2nd wine of Brane-Cantenac. Same style as the Notton but more structure. Hearty too, and good balance. Finish to chew on. 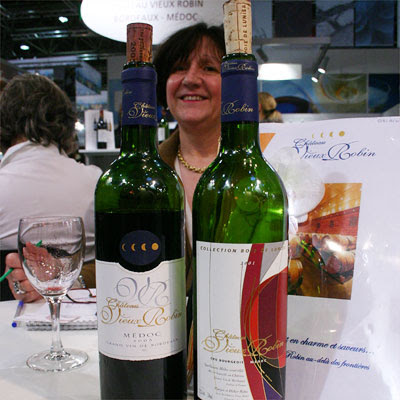 Maryse Roba, owner of Château Vieux Robin with two of her 2005's: the Cuvée "Bois de Lunier" and the Collection "Bois de Lunier". The nomenclature is intricate, but the wines are good.

Finally − something I shouldn't forget mentioning − Bordeaux négociant Guillaime Cottin from Dubos was so kind to offer me a glass of Château d'Yquem 1997, and I briefly scribbled some keywords in my pocketbook: Suave-sweet. Mineral start. Unctuous. Endless finish. Freshness too, also in the nose. Superb.