- June 29, 2009
Hunger for exciting new discoveries (as well as for good food) led us to Burgundy again. Us? That is my friend Jan van Roekel and myself, we mostly do these travels together.

Thursday 18 June we arrived, and upon descending on our hotel we did nothing but strolled around a bit in Beaune and ended up in restaurant Le Goret, where everything is about the Pig. I had the best Andouillette I ever had. It was an Andouillette AAAAA, so that will explain the quality. AAAAA stands for Association Amicale des Amateurs d'Andouillette Authentique, which is a group of various Andouillette professionals who strive to make the very best Andouillette possible.

So, a true recommendation. Friday we were all ready and rested for our first visit (out of four that day). Our goal was to find a great Meursault, and we had selected several interesting producers to visit.

Our first two visits were to two upcoming domains, both run by young guys in the middle of a change process: the change from selling grapes to selling wines. Their fathers mainly sold grapes, and they wish to sell wines under their own label. 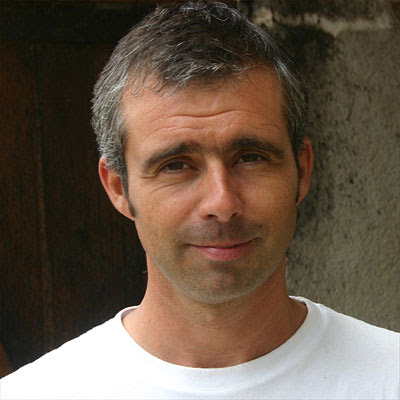 The first visit was to Christophe Bellang from Domaine Christian Bellang. Christophe's father (Christian) was more interested - and involved - in distillation than in winemaking. Son Christophe is putting a lot of effort now in establishing a name, in the first place of course by making good wine. He owns vineyards in two regions: around Meursault (from his father) and around Savigny-lès-Beaune, from his mother's family. I preferred his whites, which are nicely balanced, well-made wines. His Bourgogne Chardonnay 2007 comes across light and refreshing, mineral, with a modest hint of oak, quite soft in the mouth and good acidity in the finish. The Meursault "Les Tillets" 2007 is more seductive, rounder; altogether there is a good harmony between acidity and roundness in this quite elegant Meursault.

Next we visited Arnaud Tessier. Youngest of the producers we visited, but without computer and thus, without e-mail! Anyway, it wasn't the easiest visit to plan...

Not only no computer, also no red wines. Because: ça tâche, he said. Where Christophe Bellang has already established quite a production under his own label, Arnaud has just started. He still sells 95% of the grapes to the négociant, and this year he will make about 1.500 bottles of his Domaine Tessier. We tasted the 2007, his second own vintage. Often it is the acidity that stands out in the young 2007s, but not with these Tessiers. These wines are rather suave, clearly matured in oak (about 10 months), with some sweetish spices. 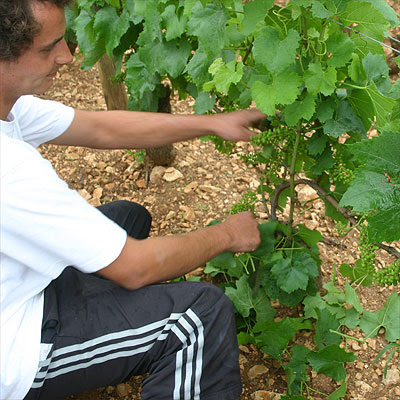 Arnaud showed us his vineyards, and demonstrated an effeuillage: a sort of striptease of the vine where most of the leaves on the lower side of the plant, at the sunny side, are removed to expose the grapes to the sun. More or less as a compensation - for proper photosynthesis to take place - the plant is allowed to grow a little bit higher. This is not something that only Tessier does, many quality producers work this way.

After a hearty lunch in a Meursault (Auberge La Goutte d'Or, by the locals referred to as a cantine) we went to Domaine David Butterfield in Monthélie. The reason that the Canadian Butterfield arrived in Burgundy is that his father started a bike rental company here. David chose to make wine. He didn't own any vineyards (and still doesn't) so he decided to buy grapes to make his wines. There are many newcomers working this way. For example Mischief and Mayhem (from the UK and Australia) and Oronce de Beler (from Paris) who we visited earlier, and Blair Pethel (from the US) who we were going to visit the day after. 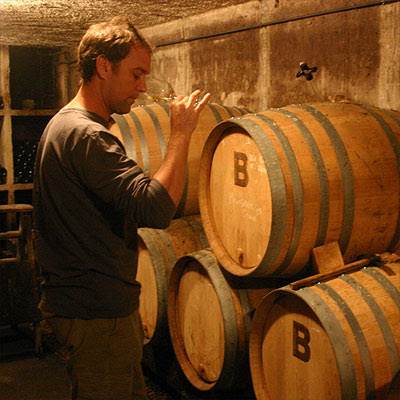 David Butterfield makes a rich, generous, intense style of Meursault, sold behind a contemporary label. Like it or not, the label is as convincing as the wine − "here I am!" David's focus is finding the best grapes. His belief is that much ought to be done in the vineyard, especially working the soil, and less should be done during the winemaking. For example David does not practice battonage. He makes lovely wines, both whites and reds. As said, his Meursault is hard to spit out, it is just lovely stuff. More about his wines later (tasting notes etc.). 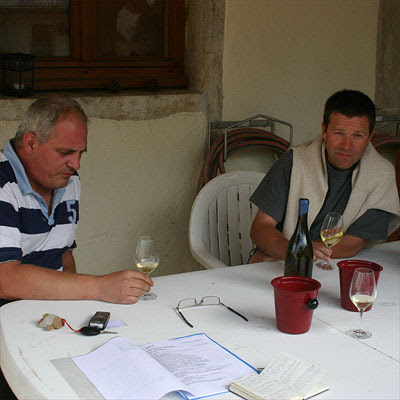 The last visit that first day was to Domaine Arnaud Ente, where we tasted an extensive flight of spectacular Meursaults with Ente and his French agent Fabien Duperray. Because I will be working with Ente's wines I won't dive into these beauties here. I will do that later.

We never go to Burgundy without visiting our favourite restaurant Caves Madeleine, and David Clark (from Morey-St-Denis, who I work with) joined us. I couldn't help ordering Pied de Cochon (pig's trotter) again.

Our first visit the next day was to Blair Pethel of Domaine Dublère. Blair comes from the US and more or less works in the same manner as David Butterfield. But he must have had more possibilities to invest. His chai is impeccable, and quite big. Blair lives in Beaune and his chai is nearby in between Savigny and Chorey. He makes a wide variety of wines and I especially liked the whites. "Like" is not the good word. I was impressed. Blair is a fiend of David Clark, and just like for David, 2004 was his first vintage. The words that kept popping in my head when tasting the whites: refinement, precision, elegance... in a way it made sense to taste these quite perfect wines in this perfect environment. 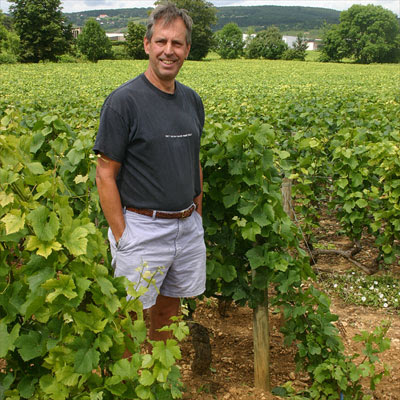 BLAIR PETHEL FROM DOMAINE DUBLERE IN ONE OF THE FEW VINEYARDS THAT HE OWNS HIMSELF. HOWEVER PRIMARILY ACTING AS A NEGOCIANT, BLAIR SPENDS MOST OF HIS TIME IN THE VINEYARDS

Pethel is a fascinating person who had three 'careers' before he started making wine! First he was a concert pianist, then a Hollywood actor and finally a financial journalist. It seems that it is winemaking that gives him complete satisfaction.

David Clark was the next stop. We picked him up in his Au Pelson vineyard where he was carefully ploughing the soil. 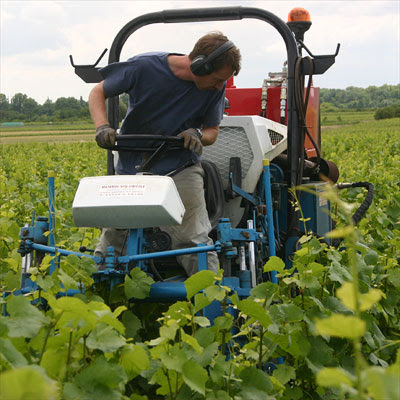 David left his tractor and we headed to his small domain in the heart of Morey-Saint-Denis to taste his 2008s from the vat. Besides the Bourgogne rouge and Passetoutgrains we tasted his one-barrel Morey-St-Denis, his new Côtes-de-Nuits Villages (from a well-exposed 1er cru-like vineyard in Brochon) and the even newer Vosne-Romanée (2008 will be the first production).

To summarize his 2008s: besides the fact that these wines are very young, and more or less reductive at this stage, they are very complete. The structure is impressive for every wine: there is good matière while at the same time the tannins are ripe and tamed. There's no hardness in these wines. These are very pure and powerful Burgundies, or will at least become that. The Côtes-de-Nuits Villages 2007 (from bottle, will be released towards the end of 2009) is tough yet seductive, complete and harmonious - a great achievement again. 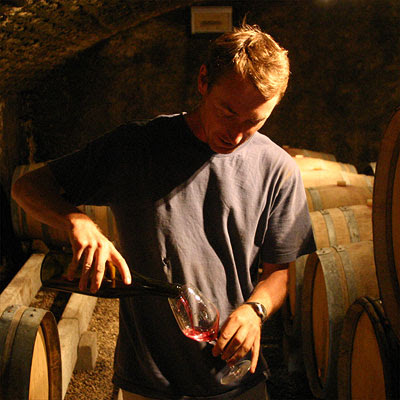 DAVID CLARK IN HIS CELLAR TASTING THE 2008S

Our last visit was to Thiébault Huber from the biodynamic Domaine Huber-Verdereau in Volnay. He presented us an extensive range of wines, both white and reds but mostly reds (Volnay and Pommard), and showed us the moon calendar that is used as a guideline in all that is done at the domain. Before Huber turned to winemaking he was a sommelier in Alsace, so his repertoire knowledge will be bigger than that of most winemakers. His whites are pleasant, pure and straightforward. From his reds I especially liked the dark and quite sexy Volnay Robardelle, as well as his Pommard. But these are wines for the longer term. Dark, quite concentrated and tannic at this stage. They are tough, honest reds with dark fruit and an earthy touch. 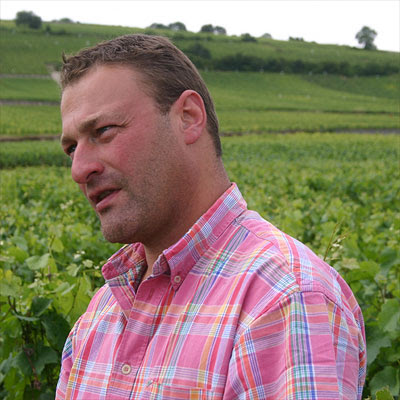 At dinner we had a Mortet (from 2001) and it was interesting to see how you experience a blockbuster Burgundy like this: it starts with a wow, and the last sips are... difficult... heavy... But perhaps we were also a little tired from everything.

On the way back we stopped in Bouzy for a Champagne refill. Despite the time of year, and despite the crisis, the beautiful ánd affordable Champagne Barnaut keeps on selling. 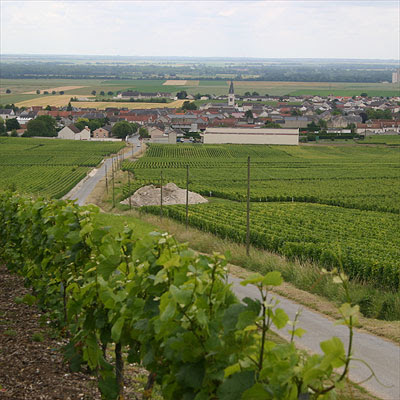