- June 11, 2009
Dwayne Perreault − "Real Chablis," I was told while still an apprentice, "comes from Kimmeridgian clay, and if it doesn't, it isn't Chablis." So what is this magical clay, so important that it determines the very essence of France's most famous white wine? 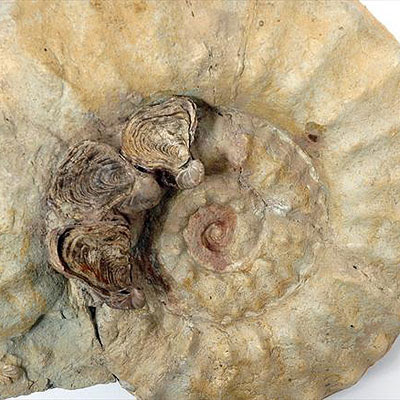 THE SECRET TO CHABLIS' TERROIR: AMMONITE WITH OYSTERS ATTACHED

About 150 million years ago, in the Kimmeridgian era (the upper Jurassic geological period, when dinosaurs still roamed the earth), Chablis and all of Burgundy was an inland sea. Today, Chablis' marl and clay limestone soils contain copious amounts of oyster fossils and ammonites from that period, and it is these fossils which give Chablis its mineral character, and in the better crus its gunsmokey, flint-like bouquet.

Kimmeridgian clay, by the way, also supplies 95% of the petroleum in the North Sea. Handy stuff.

I'm always up for a good bottle of "oesterwater," as the Dutch call it, so I was delighted to attend a tasting of six different wines from William Fèvre, one of Chablis' bigger and better known producers. In fact, 15% of all Chablis Grand Crus come from this house.

We began with a Petit Chablis 2007. These wines come from less favourable sites as their name suggests. No great complexity here, but a nice neutral wine with a steely green mineral tone. This was followed by the Chablis 2007, also mineral in character but thicker in the mouth with more citrus and white fruit, and what I would describe as a bit of sheep's cheese in the nose.

It was then time to try the Premier and Grand Crus, which come from the best sites, often on hillsides which offer some protection against frost, and all Grand Crus facing south for maximum exposure to the sun. First, Premier Cru Fourchaume 2006, slightly smokey with small citrus fruit and an impressively long aftertaste. I'm always amazed by how long Chablis' strange sour aftertaste can hang around in the mouth. This was followed by Premier Cru Montmains 2006, less fruity than Fourchaume, more mineral in character, full, fat and silky in texture. My personal favourite thus far.

Grand Cru Valmur 2006, however, made all the others pale a bit in comparison. A mineral wine with smokey flint and firestone in the nose. Beautifully integrated acidity with complicated tones of stoney minerals: in a word, fossilific.

We finished off with a trick wine. It didn't taste like Chardonnay, because it wasn't. Saint-Bris is the only area within Chablis where wines are made from Sauvignon Blanc. The 2006 seemed a bit silent, but then what should one expect after tasting these top Chardonnays?

What did we eat with our Chablis? A five year old Dutch farmer's cheese, sushi and... oysters, of course! Both fin de claire and Zeeuwse. Delicious. Thanks to Esmee Jongedijk for hosting this evening.
Burgundy Chablis tasting notes William Fèvre