Showing posts from February, 2010
Show all

Bordeaux 2009 according to Bill Blatch (and Mouton 1997 briefly revisited)

- February 28, 2010
Bordeaux insider and well-known négociant Bill Blatch (Vintex) has released his detailed view on the much talked-about Bordeaux 2009 vintage. Also, Blatch has recently launched a blog, Bordeaux Gold , and there you can request his "Vintage Report". Needless to say, the name of the blog refers to the golden wines of Sauternes & Barsac, and Blatch' preliminary attention is geared towards these sweet wines. That's a good thing, because in general these beauties deserve more attention (in January 2008 I attended an inspiring Sauternes tasting with Blatch ). Bill Blatch's preliminary Bordeaux 2009 vintage report counts 10 pages, and I guess every Bordeaux-nerd wants to read the details for this wonderful vintage. Here I will - as a warming-up - quote his interesting introduction: *** START QUOTE *** 2009: The first decade of the 21st century goes out in a blaze of glory A decade with no off-vintages – Bordeaux has never experienced that before - even those
3 comments
Read more

How Mouton Rothschild found me 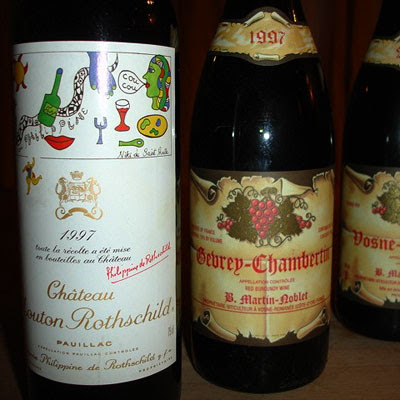 Dwayne Perreault - Château Mouton Rothschild is one of the world’s most prized wines and this is reflected in its price which, depending on the vintage, can easily run into hundreds or even thousands of euros per bottle. To put it simply, it’s a bit out of my price range. The best I could hope for would be a sample at an organized tasting, such as the latest Winefield’s auction in Amsterdam, where several vintages of Mouton Rothschild were generously made available. As luck would have it, I was unable to attend that day! But luck swings like a pendulum, they say. So I was astonished to get a phone call a couple weeks later from someone I had met very briefly at a previous auction. We had spoken for perhaps ten minutes, I mentioned that I write about wines for a blog and gave her my card. It turns out she was leaving Amsterdam and had a present she wanted to give me: a bottle of Mouton Rothschild 1997! At first I was perplexed: what had I done to deserve such a gift? But she simply
7 comments
Read more

Bordeaux 2009 according to Simon Staples

- February 09, 2010
This is the first time that I will copy a complete text from someone else into a posting. And why not if it's interesting? I received the message per e-mail from the world's biggest en primeur buyer Berry Bros. & Rudd in the United Kingdom. Besides that they have many great names from Burgundy in their portfolio, and I am proud to share with them the import of Arnaud Ente (Meursault) and David Clark (Morey-Saint-Denis). Berrys' Vicky Williams sent out the following update on Bordeaux 2009 and I don't think you will mind that I share this with you: *** START QUOTE *** 9th February 2010 ... Early indications show Bordeaux 2009 could be a spectacular vintage, says Berrys’ Sales Director Simon Staples, who has had exclusive access to some of the wines. Simon Staples and Berrys’ Bordeaux Buyer Max Lalondrelle tasted some “brilliant” finished wines and barrel samples, but will leave their final verdict on the 2009 vintage until the main en primeur tastings next month.
Post a Comment
Read more

Another trip to France

- February 04, 2010
Last Tuesday we returned from a more than 2,500 km round trip to Champagne, Burgundy and the Loire. We ( Jan van Roekel and I) could have driven all the way to Turkey. Well, that's the effort you make in order to find the best and most interesting wines. I've always described our previous travels in detail on this blog. This time I won't. By now it will not surprise you any more that besides wines I have been hunting French offal specialities like Andouillette (be it for dinner at the lovely Bistrot de la Cathedrale in Chartres, or for lunch at L'Arche), Pig's Trotter (this trip I found the best I ever had, for lunch in Le Bistrot le 7 des Berceaux in Epernay - washed it down with Champagne, makes it even better) or Tête de Veau (Plat du Jour in a Beaune restaurant that for the rest wasn't really special). Of course we went to Caves Madeleine as well, our favourite restaurant in Beaune. Bolomey Wijnimport is growing. Two years ago I had the time to desc
Post a Comment
Read more
More posts