- April 10, 2010
Bordeaux 2009 is not an evident Left or Right Bank vintage. At the same time many of the wines that I like are from the Left Bank this year. The appellation Saint-Julien shows a high overall standard. But more important: all Bordeaux appellations, on both river banks, brought forth a number of excellent wines. 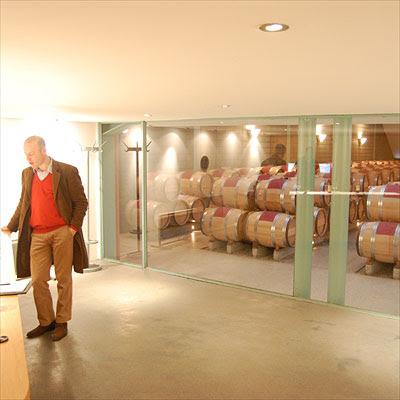 Tasting the 2009's from Château Saint-Pierre and Château Gloria. The Gloria is again one of the 'Best Value' wines.

It has been said before: Bordeaux 2009 is not a grand year across the board, but it has many grand if not spectacular wines. Besides that there are some real failures. This fanciful picture - the striking feature of the Bordeaux 2009 vintage - is the result of the character of last year's growing season.

After a normal, neither bad nor ideal start (hail storms in May, mildew attacks with the May and June rains) a long period of warm and dry weather arrived. As a result the sugar level in the fruit got very high, and by the end of August the berries were generally small containing concentrated juice, sweet and colourful.

At the same time skins and pips often didn't yet match this level of ripeness. Tannins could still be unripe, and you do not want unripe or green tones to end up in a wine. In December Vincent Bache-Gabrielsen published about this interesting phenomenon.

During the last two months of the season, September and October, the good weather continued: warm and dry days, and cool nights. Especially the late ripening cabernet sauvignon has benefited from this late summer: it made a slow and complete ripening possible, and in addition the difference between day and night temperatures accounted for a good development of aromas (and even more colour as well).

Risk avoiding producers who harvested the cabernet too early ended up with vegetal tones in the wine. Merlot on the other hand could suffer from over-ripeness this year. We saw examples of both shortcomings this year. In short, it was a challenge this year to determine the right moment to harvest.

In general, the high sugar levels led to wines that are high in alcohol. It appears that for 2009 it doesn't have to be a problem: the wines are so rich with everything that the good ones exhibit - say - a high-level balance. The best 2009s show this rich-expressive-fruit-with-freshness-plus-succulent-sometimes-even-chalky-structure-with-ripe-tannins-balance. And the very best aren't even overly heavy.

The wines. Let me start with the most embarrassing part: I missed out on four important wines. On the other hand, I know they are among the best, so why bother? Latour simply wasn't part of the full schedule. Stupid, it won't happen next year. Pontet-Canet changed its mind on quite short notice and did not present its wine on the UGC tasting of Pauillacs. So missed that one too. And I missed Calon-Ségur and Grand-Puy-Lacoste; I don't know why actually.

Before I go to the wines there's one observation that I want to share: the extreme contrast between the Big-2 from Saint-Estèphe. There's the very classic Montrose: the wine is classic and such is the presentation. The best example of this is the women who change the glasses. They are dressed in old fashioned light blue Disney-like aprons. Just like the maid in the Tom & Jerry cartoons, whose face you never get to see - I really hope they will never change this!

However at Cos d'Estournel you walk into a decadent new age temple that doesn't immediately resemble a wine making facility. Don't get me wrong, it's impressive and even - stylistically - beautiful. But at the same time it's so over the top. And the same is true for the wine - I quite liked the Pagodes, but the Grand Vin is too grand for me. Two neighbours, same appellation, same pedigree. Totally opposite character.

Enough about that, let's look at the wines. What follows below is a short list of the Médocs that I liked the most.

2. Château Margaux 2009 (Margaux). Complete yet modest. Attractive freshness, some chalk. Good structure and strikingly soft. Like thick velvet. Bit closed (9/10). The Pavillon Rouge 2009 is great. But it is also a wine that shows well in it's youth. It's soft and fresh, there's powerful vital fruit in the mouth and the 2nd wine also has this lovely velvet texture. De-li-cious (8+/10). The Pavillon Blanc 2009 (100% sauvignon) is beautiful too and kept elegant by - in contrast to the years before - leaving out the last part of the press wine. Very intense and extroverted nose, lots of freshness, no oakiness at all, less exotic than previous years (8/10).

3. Château Léoville-las-Cases 2009 (Saint-Julien). Some gentle sweetness in the nose. Dark wine with lots of depth. Powerful, but not overpowered. Serious ripe tannins, big structure. Very healthy and pure fruit, very harmonious. Meant for the long term, and at the same time the purity of the fruit is inviting (9-/10). The new 2nd wine Le Petit Lion 2009 shows pleasant sweet fruit. Easy and fruity, very lovely, for the medium long term (8-/10).

8. Château Montrose 2009 (Saint-Estèphe). Classic power like a clenched fist. Not the friendliest wine at this moment, but there is a nice purity about the fruit. Good structure. This is for a deep cellar. Hearty wine (8++/10). The 2nd wine La Dame de Montrose 2009 is good too: vital fruit, serious acidity, tough but not too, chalky tannins, classic (8/10).

9. Clos du Marquis 2009 (Saint-Julien). Now subdued. Hint of sweetness. Same purity as the Léoville-las-Cases. Quite tight in this stage. Serious wine with a fascinating minerality. Quite lovely stuff despite its youthfulness (8++/10).

13. Château Langoa-Barton 2009 (Saint-Julien). Ripe big broad fruit. Lots of matière and colour, and supple at the same time. Quite tough stuff, straightforward. Hint of sweetness too (8/10).

18. Clos du Jaugueyron 2009 (Margaux). The rather rare Haut-Médoc is one of my favourite Bordeaux's, the Margaux is very rare. The 2009 Margaux shows vital, attractive fruit in the nose. Hearty juice in the mouth. This is a very complete wine, but it needs some ageing (8/10).

19. Château Pichon Longueville Baron 2009 (Pauillac). Clearly the more masculine part of the Pichons. A bit spicy, less approachable than the Comtesse. Serious Pauillac for in the cellar (8/10).

20. Château Saint-Pierre 2009 (Saint-Julien). Not as open as its sister Gloria (which has a much bigger proportion of merlot). Darkness and freshness, good structure which is quite soft actually. Lively acidity (8/10).

21. Château du Tertre 2009 (Margaux). One of the Best Value wines this year. Frédéric Ardouin is clearly doing a good job here. Yields went down seriously the last years, cement tanks were added in the cellar (next to the wooden tanks from the 1999 reconstruction) and the inverse osmosis machine has left the premises. The 2009 presents itself soft and ripe. A supple medium-bodied wine with some sweetness. Lovely stuff with a nice fresh and mineral touch (8/10).

Hampers said…
What a wonderful post, beautifully written. It captures these wines so well. Keep on posting :)
April 11, 2010 at 4:52 AM

Lindsay Ronga said…
good read ... always nice to get first hand account from someone who is actually trying the wines
April 18, 2010 at 4:16 PM