- November 16, 2010
The Bordeaux 2008 vintage is about to loom up on the horizon. The wines have all been bottled, and the bottles are resting quietly at the châteaux - read: stabilizing and maturing - before they will leave Bordeaux in the course of 2011.

However, some bottles left earlier. They were opened at one of the Union des Grands Crus tastings that are traveling around the world. Yesterday the royal procession halted in Brussels. 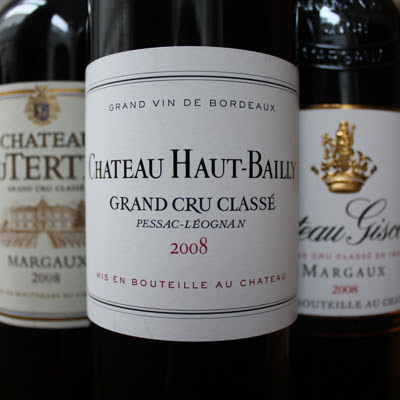 It was an interesting tasting, and my intention was to taste all reds. I almost succeeded, but towards the end of the tasting an unexpected turn of events had the effect that I missed some important wines. Among these are favourites like the two Bartons, the two Pichons, Pontet-Canet and Lynch Bages, and all Saint-Estèphes...

The result: this posting cannot be complete. But luckily there are plenty of accounts of these UGC 2008 tastings, e.g. you might check out Neal Martin's stories on the 2008s (login required).

Let's start with a general impression. The picture is good but varies. I have tasted plenty of wines that did not convince me (these I have not listed in this posting). A few were easy and light, OK for the short term but not especially exciting. Some wines were dull without fruit, or without a so-called mid-palate - empty wines. A few were over-extracted and/or were showing unpleasant, unripe tannins. But luckily these failures belong to a minority. Most of the wines range from correct to good, and even to great.

I will pick out the best that I tasted:

Note: interesting wines such as Fonroque and Grand-Corbin-Despagne were not present.

By the way, this posting would have been incomplete anyhow: there were no premier grands crus to taste… The conclusion: Bordeaux 2008 is a true value for money vintage. Good quality, and 'cheap' compared to 2009. The 2008 prices are gradually increasing now, but there are still some very interesting deals to make.
Bordeaux 2008 Brussels Neal Martin tasting notes Union des Grands Crus

BeyondTheMargin.net said…
No opinion on Pichon-Baron? It was my favorite of the UGC tasting in Los Angeles.
February 11, 2011 at 11:45 PM

David said…
As I wrote "towards the end of the tasting an unexpected turn of events had the effect that I missed some important wines. Among these are favourites like the two Bartons, the two Pichons, Pontet-Canet and Lynch Bages, and all Saint-Estèphes..." Wasn't happy about it, please don't rub it in... ;-) Will be in Bordeaux early April so perhaps I get a second chance! Cheers, David
February 12, 2011 at 11:57 AM