Short trip to Burgundy, a summary

- June 27, 2011
It's the Monday after the Vinexpo week, it is gorgeous weather, but the Bordeaux trade is locked in behind the computer because, as expected, the finale of the lengthy Bordeaux 2010 campaign is still being played. This morning Cos d'Estournel kicked off with 'friendly' price of - more or less - € 275 average consumer price. Friendly, because the price dropped a bit, by 5,7% to be precise.

The second wine, Pavillon Rouge du Château Margaux, was released at around € 150 consumer price, which is 80% on the 2009. Dramatically on the one hand, but in light of the recent price rises of the second wines of the first growths in general, and that of Pavillon Rouge in particular, this new price - unfortunately - makes sense. A new third wine will soon fill the gap. The amount Pavillon made is down seriously, thus the allocations are smaller this year (about 50%!). The lovely and rare Pavillon Blanc du Château Margaux was also released, at - more or less - € 133 consumer price (12,9% on 2009).

Now it's lunchtime, which allows me to write something about our Burgundy trip. As a guideline I will use the 5 tweets that Jan van Roekel posted after we returned (I did you some tweets while we were there). Here we go: 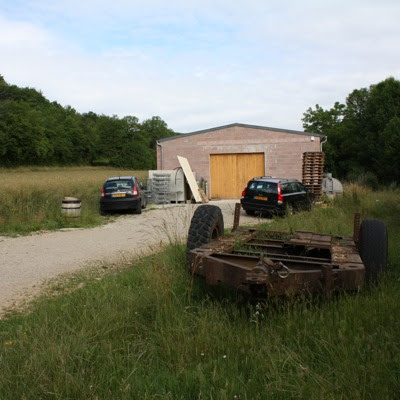 Aurélien Verdet's cellar. Perfect from the inside, simple from the outside

Aurélien Verdet's father has been farming organically since 1971, and Aurélien (under 30) has of course continued doing that. Their vineyards are in the Hautes-Côtes de Nuits near Arcenant where the cellar is located. A 100% functional cellar, nothing fancy about it, see the picture. Perhaps I'm the first merchant to shoot this bare barn, but it does tell something about Aurélien's wines: 100% purity, 0% bullshit.

Aurélien extended the domain and now produces a complete range of wines from the Côte. In most cases he is the one to work the vineyard, and in that case it is currently in conversion to organic farming (certification expected in 2012).

Jan points out the Bourgogne Rouge that was added to his portfolio. This is one of the wines which is in conversion to organic. It comes from land located just across the D974 from the appellation Vosne-Romanée. The wine has a lively nose of explicit Pinot, and some smoke, and it has a slightly creamy texture. For the rest it has what it should have: agility, freshness and intensity. Great affordable Pinots are always more than welcome! This one will be in Amsterdam soon. 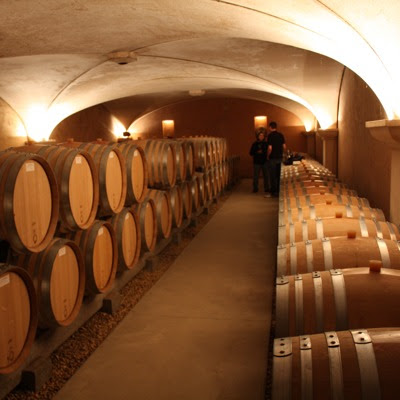 The beautiful barrel cellar for the reds from Anne Gros, Vosne-Romanée

Two more favorites. Anne Gros belongs to the category 'artist'. She makes true "fine wines". It is curious to see all the new and quite new oak lined up in her meticulous cellar in Vosne-Romanée, as oak never stands out in her wines. What Gros makes could be summarized as very harmonious, pure and juicy. It's always hard to find and I tend to buy bottles here and there, and sometimes at auctions.

Number two is Domaine Arlaud. This is a fast rising star. One way to describe the wines is that - in comparison to Gros - they are a bit more masculin, without being tough or hard. The wine is kind of sketched, instead of painted. A different artist, and a different terroir. Every time I visit Burgundy I buy a case Arlaud at the Caveau des Vignerons in Morey Saint Denis. From the decreasing availability it is clear that this (organic) wine is more and more sought-after. 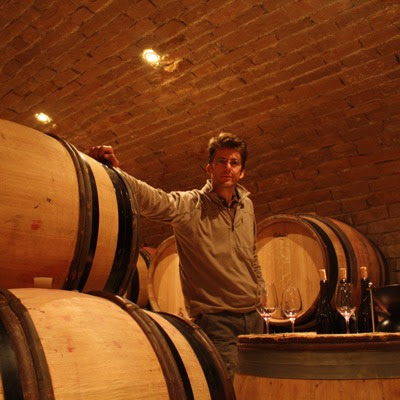 Close to perfection. These wines are so gentle, these dance in the mouth. I have written several times about David Clark, the story about his technical past, about the vineyards which he tends as grand crus, about his extreme perfectionism which for example makes him design and construct a - thus homemade - bottling machine because the ones on the market aren't good enough. Or what to think about the near robotic vineyard buggy? On the photo you see David's machine, and everything is focused on... quality.

It's hard to find the right words to pinpoint this wine. Perfection is difficult to describe. I. Just. Love. It. 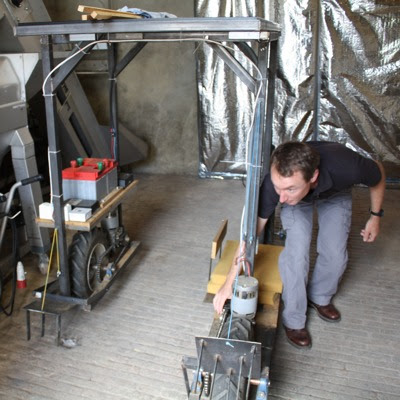 David Clark showing his vineyard buggy, Mark 4 I think it was

Bolomey Wijnimport is the only importer on the European mainland and I am glad the wine is not too popular: most people have never heard of it. I am always scared that it sells out too quick. Anyway, a vintage never lasts a year so often availability is zero. Funniest allocation is that of the Vosne: 12 bottles.

Jan van Roekel, tweet 4: Recap pt.4: If you think '09 is a great vintage only for reds, think again. Mouth-watering mix between richness and freshness @ Arnaud Ente

That's well put, Jan. I agree! To write a blog posting it is easier to visit some less great domains too. It's more difficult to be enthusiastic again and again. But anyone who knows the wines from Arnaud Ente knows that I am not exaggerating. We simply had a great line-up of visits again. A mouth-watering mix between richness and freshness, what to add to that... dear sommelier, if you were still snoozing this is the moment to wake up!

About three years ago we made our first visit to Domaine de la Bongran (Gautier Thévenet) in the tiny village of Quintaine beween Viré and Clessé. We brought back some bottles, and enjoyed them a lot. This is different, and very special. This is slow wine pur sang. The youngest vintage available is 2005, and we bought some 2004. Very rich and ripe, with honey and butter, this is simply a different league. If you want to know more, follow the link to the story I wrote about them back in 2008.

And then David Butterfield. Here I'm even the sole importer for all of Europe! Yes, truly convincing stuff. Despite the name it's not so buttery, a bit perhaps, it's definitely also refined and fresh. It's actually the same as with a good and affordable Pinot, it is great to have a quality-Meursault for just under 30 euros. In a few years time that won't be the case anymore, but at this moment the young David has not yet been widely discovered...

Reading back it almost seems like a sales story, but believe me, it's all true and straight from the heart.