- August 30, 2011
On our way from Château de Pressac (previous posting) to Château Guiraud we stop for lunch in the ancient village of Castillon-de-Bataille. We’re always looking for that certain place, and our nose to find that certain place is getting better all the time.

And there it is, no doubt. We see the sign saying “andouillette” and it is as if the car parks automatically. There’s no discussion. Once inside it is crystal clear that we made the right choice: half of Castillon is having lunch here. 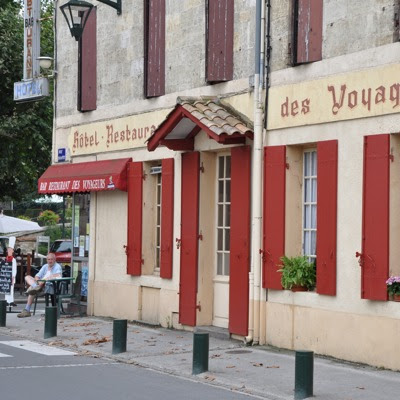 When the waiter hears us say “three times andouillette” his face changes. “Wow, you’re sure?” From that moment he is our friend. We have to come and see the sausages being grilled on an open charcoal fire. 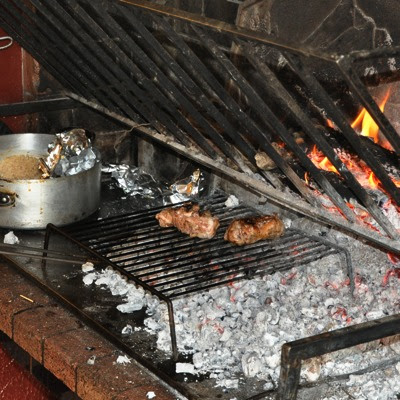 And at the table something happens that I have not seen before: with a sharp knife the waiter makes a perfect incision over the length of the andouillette (in Holland we do that with a frikandel to stuff it with curry, mayonnaise and onions, and call it “an open leg”). Next he scatters freshly cut onion chips over the sausage, and then the final touch: a generous pour of red vinegar. It turns out to be one of the best andouillettes that I have ever tasted! 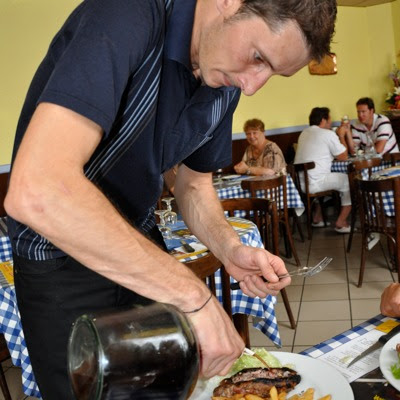 Later Pauline Vauthier, daughter of Château Ausone’s Alain Vauthier, sits down at the table next to us and that is the final proof that we have found the place to be: Les Voyageurs.

Fueled and happy we drive south through the beautiful but less prosperous part of Bordeaux called Entre-Deux-Mers: policultural land, as it’s not just vineyards that one sees here. Once we cross the river Garonne the landscape again turns into broad carpets of vineyards: Barsac and Sauternes. And soon we drive up the long, Roman driveway that brings us to the buildings of Premier Cru Classé Château Guiraud. 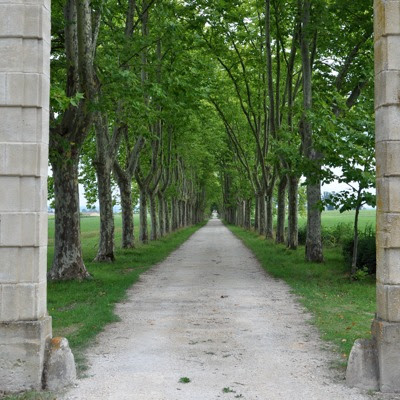 Guiraud is the first Sauternes grand cru to turn to organic farming, a process of several years, and the first officially certified vintage will be this year, the 2011. It is interesting to look at Guiraud’s alternatives to the various conventional means of agriculture:

1. Fungicides: to protect Guiraud’s vines from malicious fungi, organic products are applied.
2. Herbicides: not used. Grasses and weeds, adding to the biodiversity in the vineyard, are welcome. Competition between vine and other growths forces the former to dive deeper into the soil. Every once in a while the vineyard is ploughed.
3. Insecticides: not used. The most common natural answer, sexual confusion, is not used either. Sexual confusion is about getting rid of the insects. Guiraud has chosen to recreate natural balance by restoring biodiversity.

With that Guiraud has opted for a more complex, but very fascinating route: it’s a true example of sustainable development. The following things have been done to restore natural balance:

• Hotels for insects: little open ‘houses’ with ‘rooms’ holding different kinds of wood to attract a wide variety of insects. The vineyard is the hotel’s garden.
• Bird houses: there are as many as 40 houses for tits and these little birds eat the insects.
• Plantation: between the different vineyards, patches with other plants are grown.
• Clones: at Guiraud they make their own clones. Per vineyard up to 15 different clones are used (instead of 1 optimal one) to strengthen biodiversity.

As a result the vineyards, vines and grapes at Château Guiraud are not just clean, they are also healthy and hence more energetic and strong. I am impressed by their approach. But there’s more. There seems to be a relationship between working naturally on the one hand, and the desired development of noble rot on the other hand.

In the tourist version of the botrytis story the morning mist that occurs during late summer still plays an important role. In reality this mist is quite a rare phenomenon and cannot be the key driver for the growth of noble rot.

Recent research shows us that the fungus that causes the noble rot comes from within the grape. It has been sitting there – dormant –since the end of flowering and wakes up at the end of the season to do its noble work for us. The mentioned relationship between working naturally and the development of noble rot is simple (or at least seems simple): chemical fungicides used during the growing season have a negative impact on the development of noble rot.

It explains why at Guiraud picking usually takes place rather early, and it explains the lovely freshness that distinguishes Guiraud from many of its Sauternes peers. And to be complete: the relative high proportion of Sauvignon in the blend helps here.

So if we take the mist out of the story, what unique circumstances remain in Sauternes? Not much I’m afraid, and that’s why this mist-thing is so persistent. I’m definitely not saying that there’s no great terroir, as the terroir (gravels over limestone) is great for growing grapes. But it seems that the production of sweet whites in this region didn’t so much sprout from some microcultural uniqueness, but above all from the plain economic necessity to make a preservable wine. But that’s another, less romantic, story. 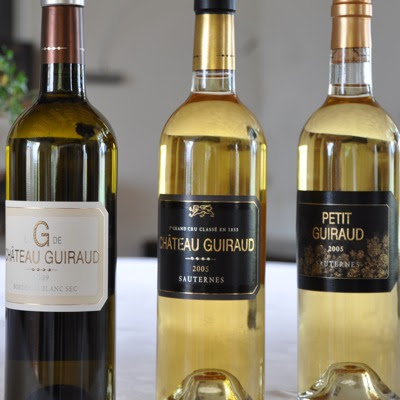 The second wine has just been renamed and restyled to Petit Guiraud and the attraction here is accessibility. We tasted the 2005 and the 2009. Lighter wines with lots of freshness and and a pleasant hint of bitterness. A wine that needs attention! Specific parts of the domain are now designated for this second wine. 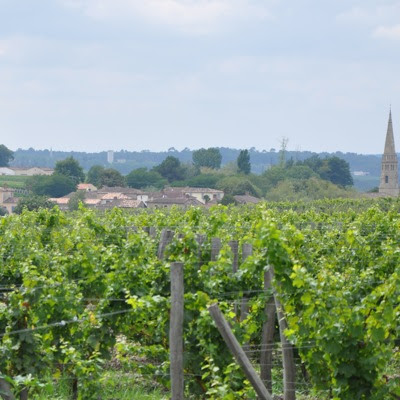 And the same is true for the estate’s dry white wine, Le G de Château Guiraud. The grapes for this wine come from the vineyards close to the village of Sauternes that are not classified as AOC Sauternes, and most of these are planted with Sauvignon. The “G” is made with the same dedication as the sweet wine. The yields are low (25 to 30 hl/ha) resulting in an intense wine.

It’s uniqueness however comes from the ripening of the wine in 2 year old barrels that were previously used for the grand vin. This doesn’t make the wine sweet, yet gives it its particular spicy and fragrant nose. Together with its intrinsical purity (read: beauty) the “G” is as surprising as irresistable.

Readers who got thirsty may be able to find some of these golden treats at Bolomey Wijnimport in Amsterdam.

Steve Webb said…
Excellent article David that captures Xavier's unique approach to making Sauternes. The mist certainly helps development of Botrytis but the wider microclimate is more influential. As for the origin of the fungus it is true that it doesn't come 'from the mist' but from within the grapes themselves or, more accurately from the soil (from where it finds its way into the grapes to flourish when the conditions are right). I am a big fan of the organic approach and agree that chemical treatments affect the development of botrytis. It remains to be seen, however, what the precise effect on the botrytis levels in the soil will be as a result of the organic farming methods.
August 31, 2011 at 11:13 AM

Catherine Leparmentier Dayot said…
Great article! Thanks for sharing this experience...
Did you know that Château Guiraud has been rewarded a Best Of Wine Tourism award by the Great Wine Capitals Global Network for the excellence of their welcoming and for their sustainable wine tourism practices!
wwww.greatwinecapitals.com
https://bestofwinetourism.worpress.com
September 1, 2011 at 10:44 AM

Andres Minguez said…
Contrary to your claim, mist is undoubtedly related to development of Botrytis. Nobody says that the fungus is brought about by mist, but that's quite different from saying that mist has nothing to do with Botrytis's development:

"It is not known what makes
the fungus re-grow in the grape berry after latency and not all
latent infections lead to a rotten berry. The proportion of latent
infections resulting in botrytis symptoms is correlated to the
duration of high relative humidity." Source: http://www.gwrdc.com.au/webdata/resources/files/BotrytisFactSheet.pdf
September 2, 2011 at 8:00 PM