Some last thoughts, and Bruno Clavelier

1. Being a wine merchant and a wine blogger is a difficult combination in December (hence the 20 days of silence).
2. Beaujolais Nouveau in general is not very popular these days. But Natural Bojo Nouveau of raving beauty appears to have a (small) group of very devoted followers!
3. The pivotal role of scent in wine is comparable with its role in sex.
4. My favourite website on wine is Chris Kissack's winedoctor.
5. This year's most popular posting on this blog is the Bordeaux 2010 recommendations posting of 2 May.
6. Bordeaux 2010 was, other than expected in the first place, a success: customers were again willing to buy at high prices.
7. If Bordeaux 2011 is going to be a bargain vintage like 2008 sales will be good, otherwise it will be very quiet.
8. Unfortunately raising prices in Bordeaux is easier than lowering prices; it's always 2 steps up and 1 step back. Sort of cheating.
9a. For a truly interesting read about Bordeaux check out Filip Verheyden's Bordeaux special of Tong Magazine.
b. One of the authors is Benjamin Lewin MW, author of What Price Bordeaux?, a highly recommended page-turner full of interesting Facts (and figures, and not myths) about Bordeaux.
10. Another fact: I drink more Burgundy than Bordeaux.
11. Then an opinion: a wine from a hot climate will never match the quality of its peers from cooler climates.
12. Wine is made for drinking, not for sipping (which doesn't mean that you have to drink a lot).
13. Fresh milk is an underestimated drink in most countries outside the Netherlands.
14. The high excise tariff on sparkling wine (3,4 times as high as on still wine!) are rubbish, they simply don't make sense.
15. Since I work with wine, my appreciation for beer has grown. 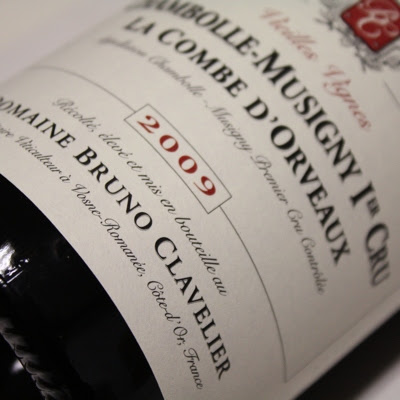 La Combe d'Orveaux, the little corner in the Musigny vineyard that did not become Grand Cru: Clavelier's grandfather never applied for that status, it would have meant higher taxes...

Last but not least: an announcement. A new top Burgundy producer has just entered the Bolomey Wijnimport selection: Bruno CLAVELIER from Vosne-Romanée. Clavelier makes pure, meaty, deep-dark pinots, convincing and seducing. Impressive stuff - organic wines made according to the principles of biodynamics.

I created a Primeur 2009 offer (pdf, in Dutch) in November already, but never found the chance to send it out. So let the blog - in the end - have the scoop. Early January this offer will be sent to a selection of Dutch Burgundy lovers; note that the available quantities are tiny for these sought-after reds.

jan suyderhoud said…
Some remarks in the new year on your unconnected thoughts:
3. Fully agree and an original thought as well
7. Fully agree, but perhaps wishful thinking.
9b. Again, agree one of the best books on Bordeaux
10. For me it is by far the other way round, should perhaps try your Burgundies.
11. This depends in my opinion on the grape, each has his favorite climate!
12. Wine is made for savouring!
13 I wonder where you can by real fresh milk!
15. There are so many types of beer, unfortunately we cannot get many exciting types in the Netherlands, but depending on the weather and my mood I like to drink a certain type.
January 4, 2012 at 4:26 PM