- May 25, 2012
In Dutch "De Malle" means "The Fool". Perhaps that explains why they, the people at Château de Malle, thought it was a good idea to raise the price of their wine this year—so far De Malle is the 'winner' with a markup of 14% on their 2010 price.

Of course I should take into account that De Malle is a Sauternes, and in fact it are the sweet wines of Sauternes who were most successful in 2011. Most Sauternes have more or less maintained the same price as they had last last year. Perhaps that 14% markup is not even that shocking after all.

No, the real fool is Quintus (perhaps I should write QVINTVS). This used to be Tertre-Daugay, until the château was acquired by Domaine Clarence Dillon (from Haut-Brion and Mission Haut-Brion) who obviously put some serious money into the domain.

But the same vine that produced a wine that was sold for approximately €25 en primeur last year (the Tertre-Daugay 2010), brought forth a wine of a shocking €133 one year later (Quintus 2011). I wonder if the wine sold at all. On Twitter there was much laughter about this release.

The only positive thing that I can say is that the wine is good. I wrote quite nice things about it in my notebook, and also used the word 'promising'. By then I had no idea about the price, and perhaps thought about a modest start in a difficult year, or something like that. For around €25-30 it would have ended up in my list of recommendations. Now it has ended up in the list of commercial miscarriages. 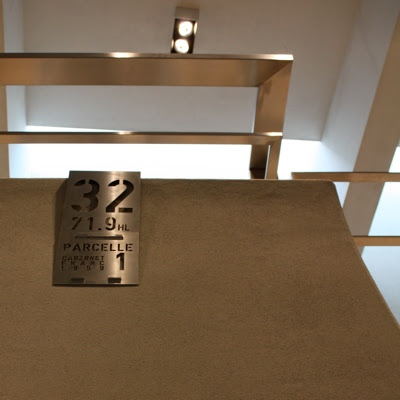 detail of one of the new fermentation vats at Cheval Blanc

There is one wine that clearly proves that this can be done differently. And that is La Tour du Pin, owned and made by Cheval Blanc. Also recently acquired, also owned by a premier grand cru classé, and also from a very good terroir. The important difference is that La Tour du Pin is sold at about 30 euro's. Needless to say, I highly recommend this wine! Made in the same spirit as Cheval Blanc, and really at a fraction of the price.

The last two weeks were crazy. I really hope one day the Bordelais will learn to spread the releases more evenly. Now pretty much all is released within about two weeks. That means that there's hardly any time to process all incoming offers, and that there's definitely no time to write! So I'm glad this Friday is quiet so I can finally publish an update.

The campaign is not completely finished, but most has been released by now. We are still waiting for wines like Duhart Milon, Vieux Château Certan, Léoville-las-Cases and Ducru Beaucaillou.

An R means Recommended, RR means Highly Recommended, and RRR means Not To Miss (I foremost looked at the price-quality ratio). The prices shown are indicative consumer prices including VAT in euro's.